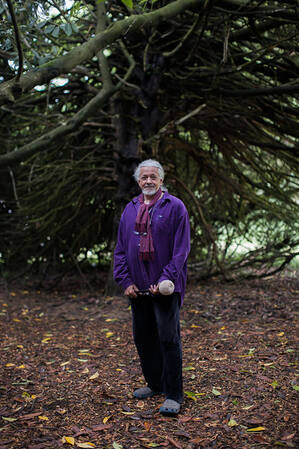 Training is usually led by Aidan McIntyre & Don Conreaux with the help of guest teachers who bring their own host of talents and skills to the workshop.

Conreaux and McIntyre, who often travel and teach together, met in 1993 during a festival in Mount Shasta in northern California. McIntyre recalls sitting under a tree when Conreaux “played [the gongs] in front of me and I literally disappeared into the tree. My body felt like it had disintegrated into a ball of light.”

Gong Master Training will help you along the road to Mastery in the use of Sacred Sound as a transformational tool in the service of Humanity. Each day during the training, we'll be working with different sacred instruments; to learn how to use them in performance and healing for others as well as ourselves.

We will try and emphasise all areas of Gong Mastership depending on the needs of the students. Topics will include Gong Playing Techniques, (including the many different strokes and the use of the many types of mallets), the new Rotogong techniques, using Singing Bowls, Conch Shells, and many other instruments both ancient and modern whether man - made or sourced from Nature.

When a gong is struck properly, the air swells with reverberations, creating a range of tones. The layers and clusters of sound produced are sometimes likened to bells ringing, monks chanting or choirs singing. Like other percussion instruments, each gong has various percussion points that emit different sounds when struck with a mallet — the harder the head of the mallet, the sharper the sound. The sweet spot, or most resonant area of the gong, is often found between five and seven o’clock.

There are down strikes, up strikes, multiple strikes and special sequences. Ultimately, however, you need to play intuitively. “Don’t be intellectual with your left brain,” says Conreaux. “You don’t play the gong, the gong plays you.”

The precise origin of the gong is unknown. The first gongs are thought to have been fashioned from stone during the advent of agriculture, with metal ones originating during the Bronze Age. Over millennia, gongs have been used for both ethereal and earthly purposes, playing an important role in temples and ceremonies but also used to frighten enemies in war. More recently, gongs were in vogue during the Victorian and Edwardian periods in wealthy households to summon domestic help or signal that dinner was served.

These days, gongs are played in settings that range from grand corporate openings and special events to sacred ceremonies, concerts, yoga studios, detox centres and support groups for those suffering from diseases where sound or music have proved a useful form of therapy.

You can play the gong even if you are musically illiterate but brawn certainly helps, as the larger mallets are heavy — to say nothing of the object itself. Most gongs are played on a stand because they are too heavy to hold. Modern gongs are made mostly of copper or bronze, with an amalgam of other metals including tin, brass, iron, lead, zinc or nickel. There are flat gongs and hammered gongs, constructed from a metal disc of bronze alloy. To shape the instrument into its full range of frequencies can take many months. They are not mass-produced and range in price from a few hundred to tens of thousands of pounds.

Conreaux & McIntyre show you how to play smaller, hand-held gongs and explains numerous strokes and techniques, with names such as pendulum, heartbeat, swinging, whirling and muffling. Practise with a range of mallets and also with small rubber balls called flumies. These are dragged along the surface of the gong to create high harmonics. The tones that are emitted are sometimes likened to dolphin and whale noises.
​
Hawkwood College which will be the GMT home for the foreseeable future.  Hawkwood is an educational charitable establishment founded on Rudolf Steiner’s anthrosophical values and located in a beautiful location on the edge of Stroud in Gloucestershire. To learn more about Hawkwood college click here
Photo used under Creative Commons from jikatu