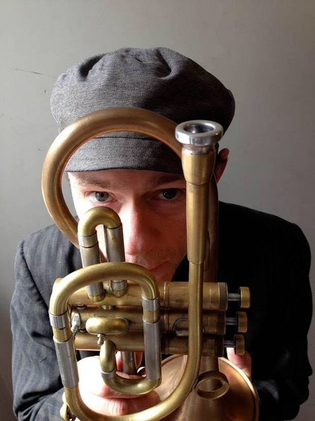 Jon Birdsong is a specialist in conch shell.  In his studies as trumpet player at the University of North Texas, (US) he became fascinated with the conch shell as an ‘original trumpet.’

He has pursued a widely varied career in music, studying baroque cornetto (another kind of trumpet) and focusing on music of the 17th century while working as a composer and jazz musician with many groups and projects of his own.

As creative  musician and composer has been using it extensively in groups and projects in the states and in Europe, touring, performing, and recording throughout the world.

His interest in the conch shell has remained a constant and he has pursued its possibilities on many fronts.  One of the fruits of this labor has been his forming of the group Spiral Consort.  This group has been making music on conch shells and developing a language of improvisation that is quite unique in today’s musical landscape.

Jon has also researched the possibilities of conch shell as powerful instrument of meditation through its almost supernatural vibrational capacity.  Its use in Tibetan Buddhist practices are a clue to its importance as a tool and as a symbol of clarity, and purifying energy.

​Mr. Birdsong will be bringing knowledge of the techniques of fully achieving a sound on this mighty instrument and sharing this in a concentrated but playful way with the students at Hawkwood.
Photo used under Creative Commons from Ani Carrington