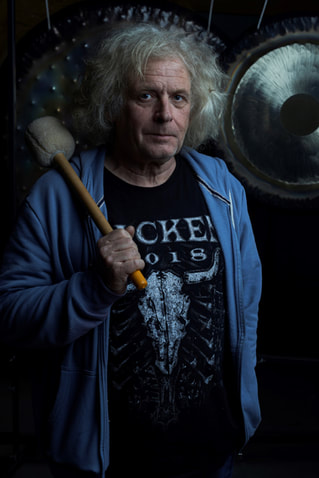 Rolf Nitsch needs no introduction... In case you aren't familiar Rolf was born in Northern Germany near Kiel in 1956. The son of an aviation professional from Ermland (Warmia, Poland, East Prussia). After School he served his apprenticeship in metal working, Then, he met Toomas Paiste, who liked Nitsch's attitude towards craftmanship.
In 1977 Rolf started his training as a Paiste Gong maker, which included not only building gongs, but everything from construction of Gongstands too the packing and shipping. On the close guidance of gong mastermind Toomas Paiste he was part of the creation of new Gongsounds along with Master Gongmakers Rudi Bonness and Siegfried Jusseit (building Gongs since 1947!)

​He had the best training one could achieve - leaving him as the only surviving member of that creative master quartet. This overall Gong Creating experience lasted more than 20 years.
Then in 2012 he started to develop and research the Gongs Place in music therapy
In the beginning of 2013 he cooperated with Johannes Heimrath and Sona Gongs. As a result of this cooperation Rolf Nitsch created the Gongland Gong Series. Now  they arecrafted by himself in his own workshop and he'snconstantly refining them.

The master Gongmaker and owner of Gongland Gongs in Germany will give two presentations on Gongmaking and also introduce his new range of Planet Gongs that students will be able to play for themselves at GMT 2021.

Due to uncertainties regarding international travel and quarantine issues Rolf’s appearance is not guaranteed although every endeavour will be made to have him present.
Visit Rolf's Website